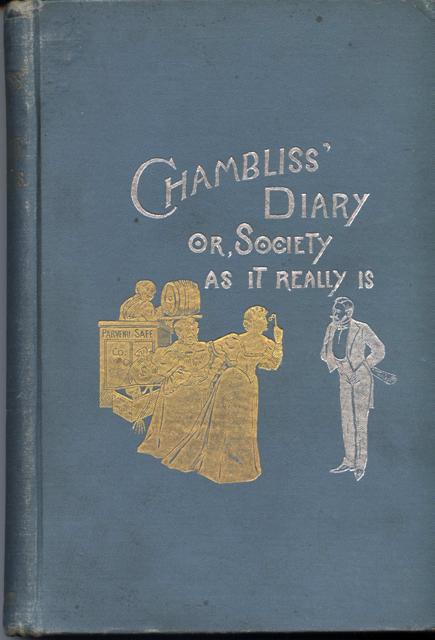 Chambliss' Diary; or, Society As It Really Is.

William H. Chambliss (b. 1865), a Mississippian, came to California as a member of the crew of the U.S. Essex in 1886 and made San Francisco his home base for the next five years as he shipped out on a succession of merchant vessels. He then tried to make his way in the city in advertising. Chambliss' diary (1895) describes his years at sea and voyages to Japan, China, Australia, Hawaii, and other Pacific ports of call as well as his life as a San Francisco man-about-town. The book consists largely of gossip and scurrilous rumors about leaders of San Francisco's "parvenucracy" of the late 1880s and 1890s: the Crockers and De Youngs and less-well-known pretentious upstarts, cardsharps and gambling hustlers, and society publicists like E.M. Greenway. His virulent racism regarding "the negro ex-slave" is accompanied by two reproductions of unambiguously demeaning illustrations of the day to underscore his unadulterated opinion on the matter in case the gobsmacked had any doubts. And don't get him started about girls bathing at the Hotel Del Monte.

Title: Chambliss' Diary; or, Society As It Really Is.

Chambliss' Diary; or, Society As It Really Is.