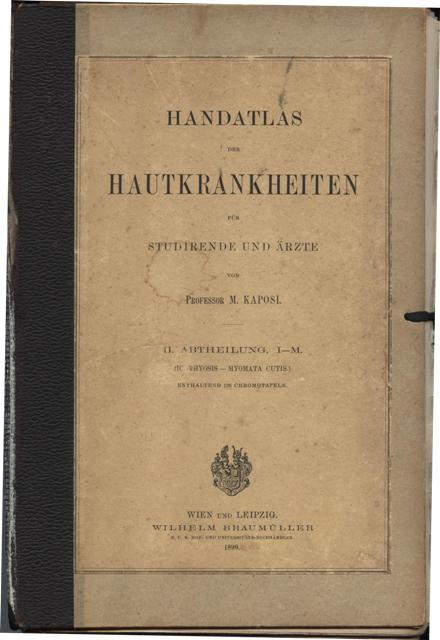 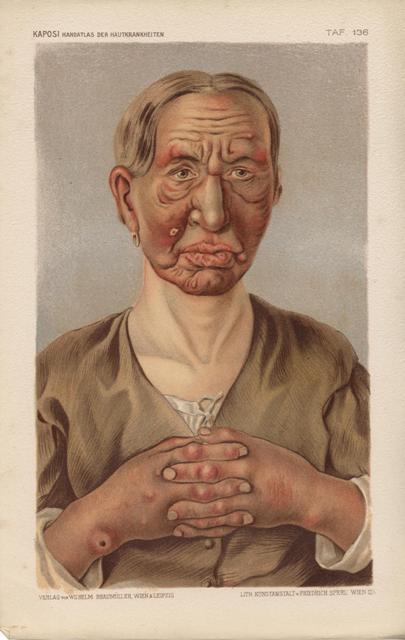 4to; issued in loose sheets house in original printed portfolio, including half-title, titles page, chromolithograph plates each preceded by medcal title of condition pictured; 104 plates [22 plates missing but med. titles present] of 126 originally issued. Plates generally in very good or better condition, with occasional light to moderate foxing, soil, and wear at edges or for the most part off images. Portfolio with string ties; joints split but held with clear tape inside; soil and stains to boards and printed paper title label.

Kaposi's name was entered into the history of medicine in 1872, when he described for the first time Kaposi's sarcoma, a cancer of the skin, which he had discovered in five elderly male patients and which he initially named "idiopathic multiple pigmented sarcoma". More than a century later, the appearance of this disease in young gay men in New York, San Francisco and other coastal cities in the United States was one of the first indications that a new disease, now called AIDS, had appeared. Kaposi's sarcoma is a tumor that is caused by a virus, Kaposi's sarcoma-associated herpesvirus or KSHV, discovered in 1993. Kaposi's sarcoma is now the most commonly reported cancer in parts of sub-Saharan Africa.According to his biographer, Dr. J.D. Oriel, "in his lifetime, Moritz Kaposi was acknowledged as one of the great masters of the Vienna School of Dermatology, a superb clinician and renowned teacher". While his mentor, Ferdinand von Hebra, is considered the "father of dermatology", Kaposi was one of the first to establish dermatology on its anatomical pathology scientific basis. He became the chairman of Vienna School of Dermatology, after Hebra's death in 1880. [Wikipedia]