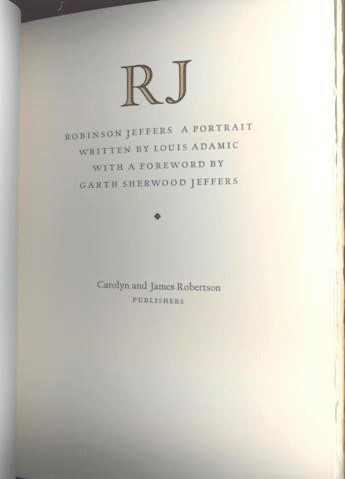 By: ADAMIC, LOUIS. WITH A FORWARD BY GARTH SHERWOOD JEFFERS.

The edition was limited to 265 numbered copies and 20 presentation copies. Signed by Garth Jeffers on the colophon. This presentation copy is lettered T. [60] pp.; 8vo; flexible boards covered in gray German bookcloth; pasted labels front & spine; designed by James and Carolyn Robertson and set by hand in Frederic Goudy's Californian types, on Rives and Italian Fabriano papers; title page initials and section numerals colored by hand; reproducing 16 photographs from the Jeffers family collection, never before published; and with the addition of a reminiscence of the period covered by Adamic's essay written by Garth Jeffers, the poets surviving son. This is the first publication of The Yolla Bolly Press.

"In July of 1928, two writers, Louis Adamic and Carey McWilliams, drove north from Los Angeles to meet Robinson Jeffers. The poet's remarkable verse was already making a national stir along with tales of his solitary and reclusive personality." The strong impressions of the meeting at Tor House were later recorded by Adamic in what is one of the most vivid and detailed description of the poet ever written. The essay was first published in 1929 by the University of Washington Bookstore in a chapbook series.