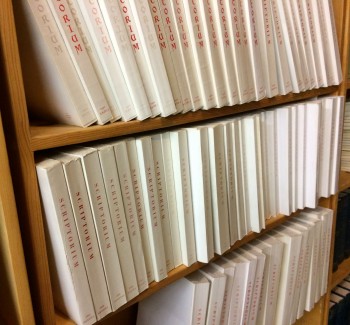 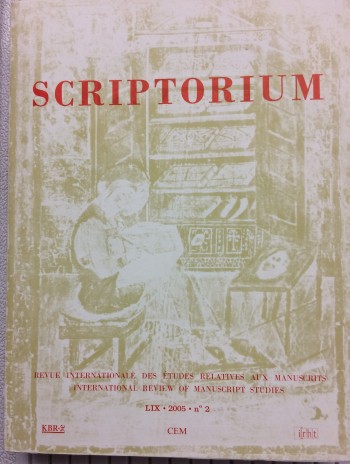 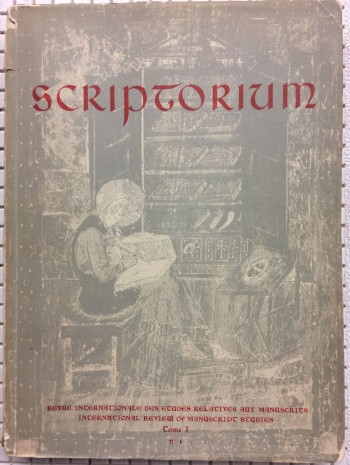 Long run of this continuing journal, published twice annually under the direction of the Bibliothèque Royale du Belgique, 50 volumes in 118 parts, lacking 21.2, 38.1, and 44.2, all but one are original copies, small quarto, publisher's white wraps printed in red, sewn bindings, hundreds of plates in B & W on glossy paper, each volume indexed, with three separate additional indexes. One wrapper frayed, two wraps partly detached, first 10 parts dust-darkened, volume 13 is the Gregg reprint in dull library cloth, else vg-fine, most are mint, from the library of Bernard M. Rosenthal with his small rubricated library label in each. Later from the library of Ian Jackson with his equally diminutive library label.

There is no online edition, only an abbreviated index. Though only in b & w, the plates are very clear and show much detail. Francois Masai (1909-1979) was co-founder, and editor of Scriptorium until just before his death. "As a professor in the history of the Middle Ages, the history of Byzantium and the history of Christianity, as a specialist in monachism and a member of the board of directors of the review Byzantion, he forced himself 'not to dissociate the history of ideas from the history of the texts expressing those ideas.' (Scriptorium obituary).