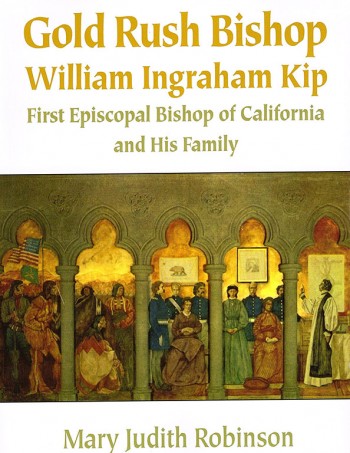 8vo; xii, 579 pages, 10 unnumbered pages of plates : illustrations (some color), portraits (some color), genealogical tables. This is the story of a pioneering cleric who established the Episcopal Church in California beginning in the Gold Rush, the Right Reverend William Ingraham Kip (1811-93) and members of his family who played important roles in American history. They counted Patriots and Loyalists in the American Revolution, merchants, physicians, philanthropists, poets and authors, an early anti-war activist, a Civil War officer (Kip's son), a U. S. President and Stuarts of Scotland. Bishop Kip was a scholarly man born into a Dutch family who settled in New York State in the 1600s ("Kip's Bay" in Manhattan was the family farm). Charged "to gather up and reduce to order" the church in wild California in the 1850s, he encountered ship wreck, bandits and grizzly bears among many challenges. Much of the story relied on valuable memoirs by Kip, his brother Leonard, son Lawrence and other family members, one of whom recorded friendships with famous English literati. Four centuries of fascinating people connected by genealogy (in Burnet, Cleveland, Dodge, Kinney, Kip, Stedman, and Stuart families) tell the history of America through personal lives.