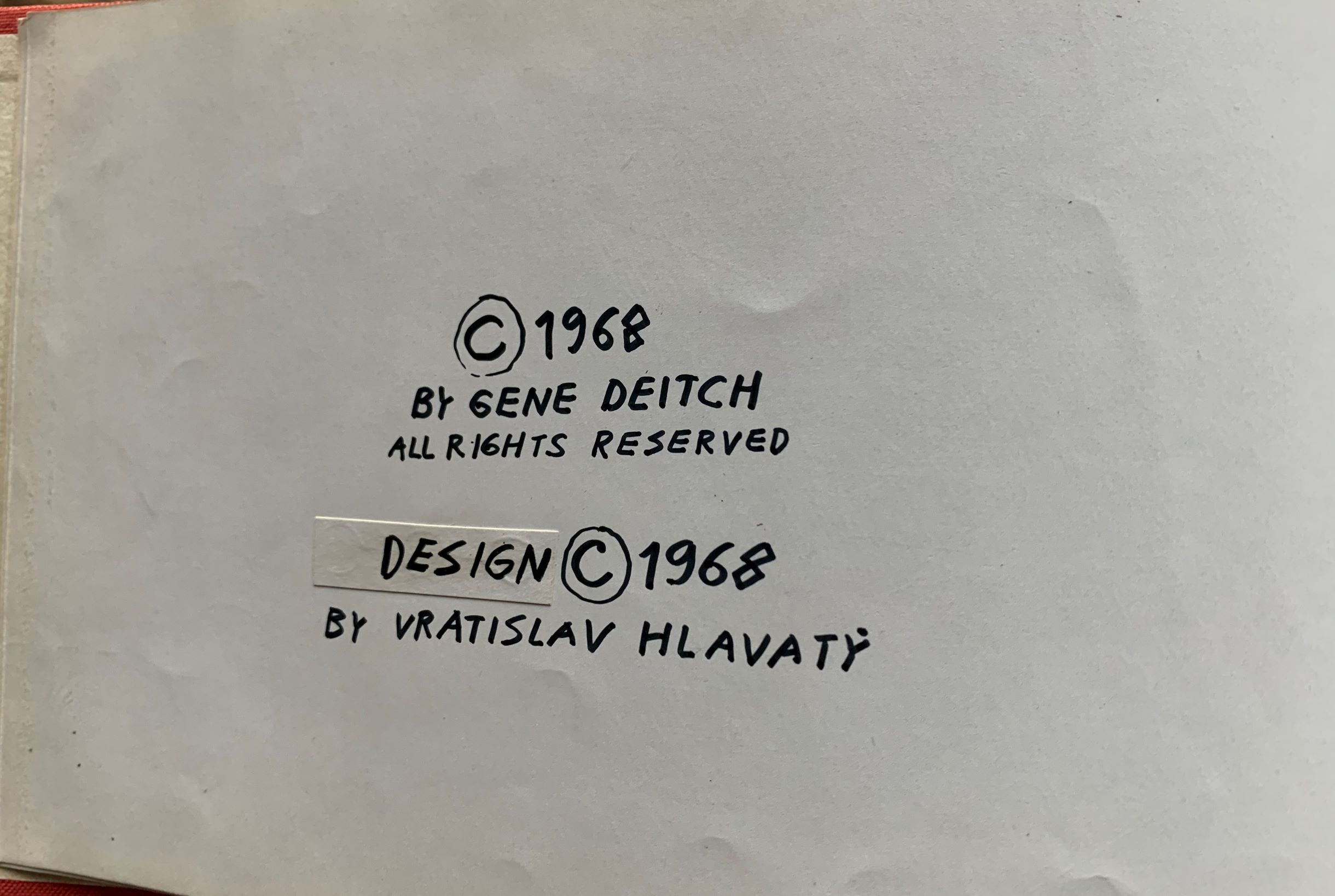 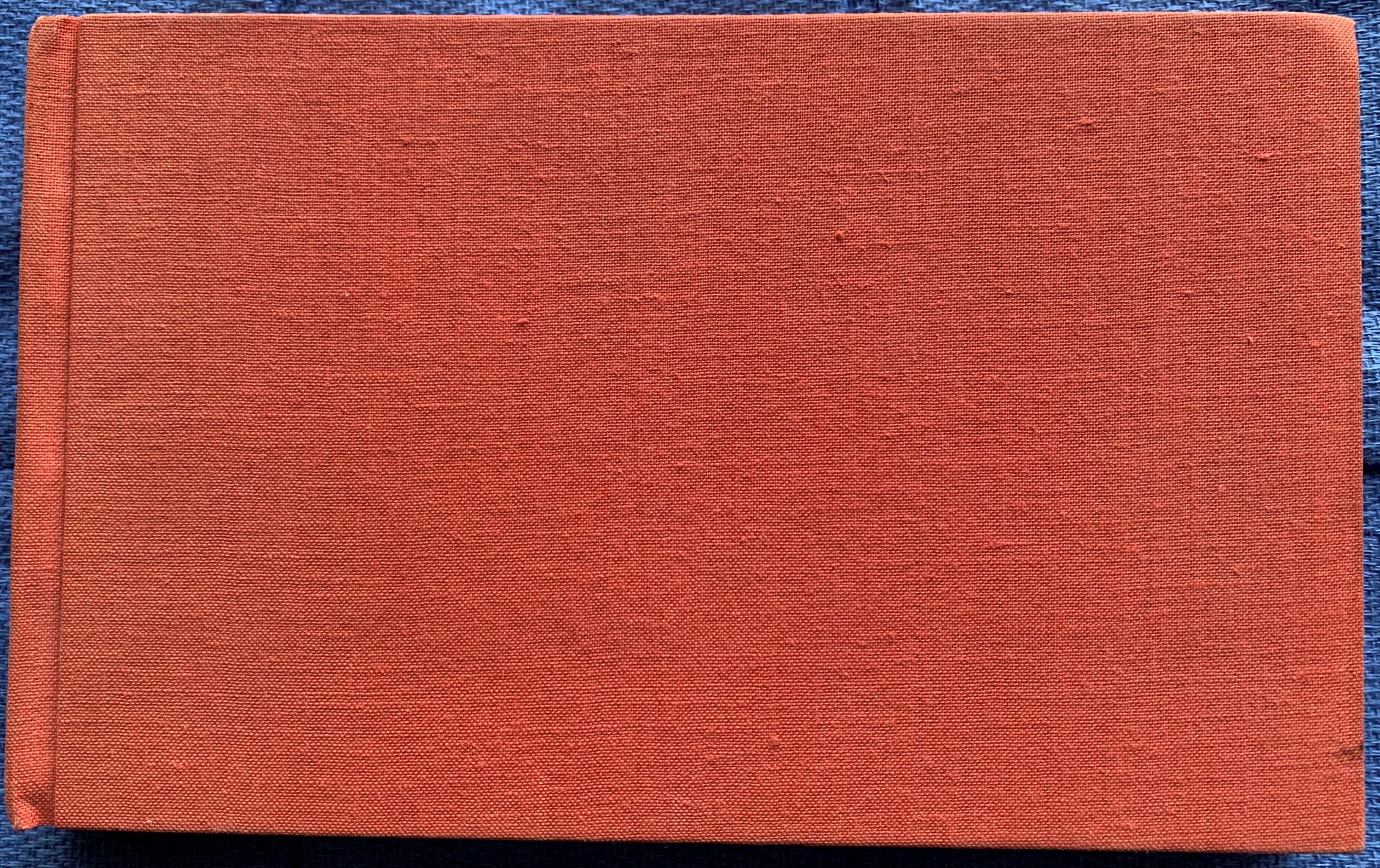 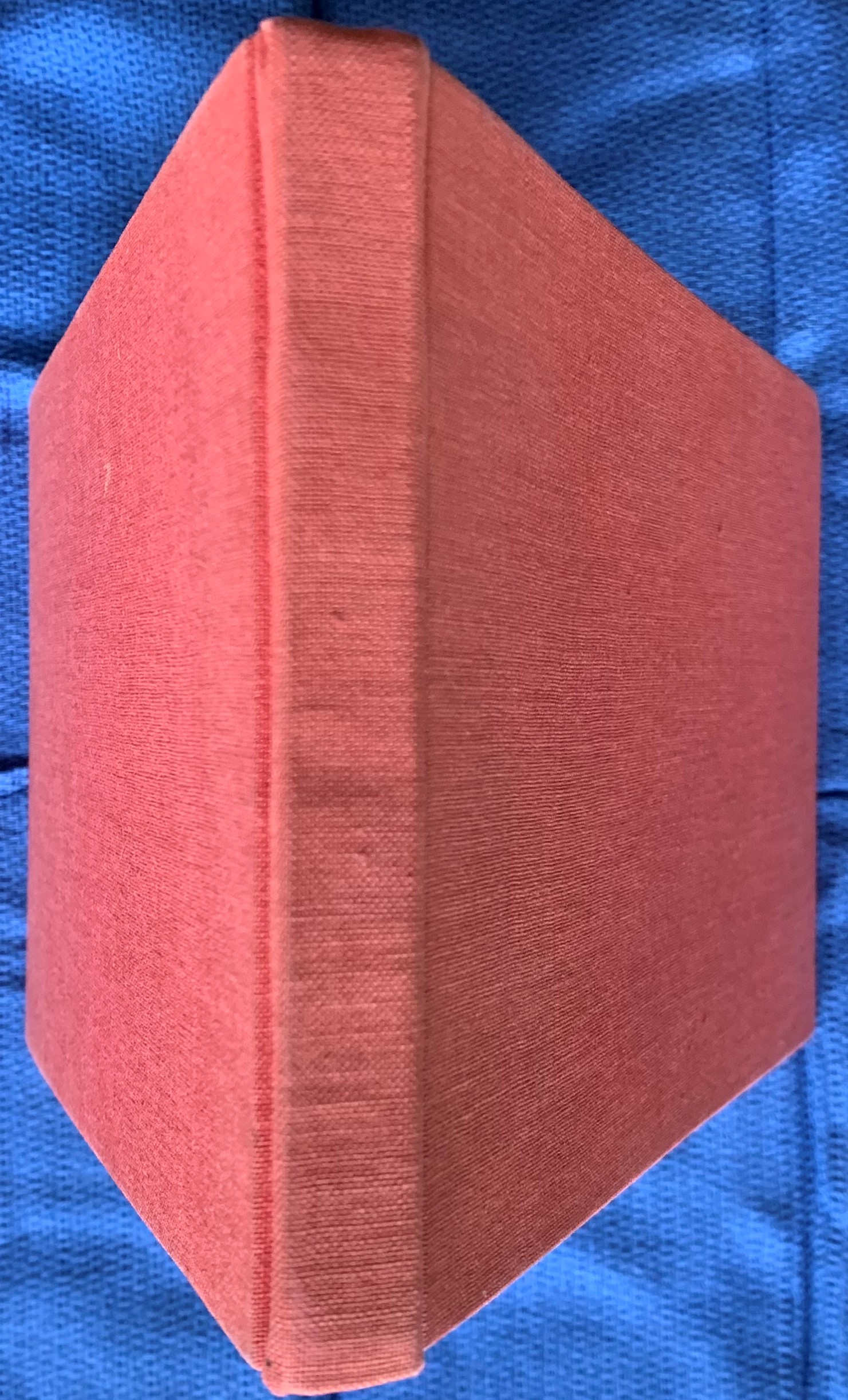 By: Deitch, Gene, with design by Vratislav Hlavaty.

Unpaged; (98) pp.; 5' x 8 1/2"; plain red cloth over boards; tan endpapers; hand-drawn and colored drawings on each page (you can feel the ink on the paper's surface). Designed in the form of a flip book, which format Deitch had used in 1967 with "Nudnik, the cut finger fumble", published by Cinémathèque Canadienne occasion of the World Retrospective of Animation Cinema as part of Expo 67. This work appears to have never been published in book form, but was produced as a film. The book appears to be unique, bound as a 'pitch bible' for The Giants. There are several pastedown replacements/edits on pages form textual parts, to half, to whole page. It appears that some leaves, are actually two pages stuck together, as another way of removing or editing parts, or reusing the back side of a page to redraw a part. One of these was just separated enough to be able to see partial drawings 'inside' so to speak.

Eugene Merril Deitch (born August 8, 1924)[1] is an American illustrator, animator and film director. Based in Prague since 1959, Deitch is known for creating animated cartoons such as Munro, Tom Terrific, and Nudnik, as well as his work on the Popeye and Tom and Jerry series. The background leading up to the creation of The Giants as a film, as well as its sensational reception and subsequent banishment, is a fascinating and complex drama. The inspiration for the story, according to Deitch, was the Israeli - Palestinain conflict: "But first, back to the dilemma of the offer by the Czechs to back an original film by me. I didn't want to offend them with an all-out no. I just said that I couldn't afford to do a film without a hard-currency backer. But that didn't stop me from thinking about the idea, and a statement I had long wished to make about the futility of violence - violence begetting counter-violence. The seemingly endless blow and counter-blow between Israel and the Palestinians was on my mind. It had been going on a long time already in the mid-60s, and as of this writing it is still going on. So even though I couldn't make such a film for the Czechs, (The Prague government at that time strictly backed the Palestinians - no evenhanded story about that could possibly be filmed here, however I might mask it.) But I nursed a hope that I might someday find a backer, so I worked up a storyboard. I titled it, 'The Giants'."It was to be staged with symbolic characters, two equally ugly, snarling, spitting dwarfish figures, one solid blue, and the other a flaming magenta, on a deathly landscape. They hurl venomous insults at each other, to the constant, irritating, rasping sound of locusts. One dwarf loudly calls out the name of his protector. Thunderous, earthshaking footsteps are heard, and giant feet and legs, the same color as the summoning dwarf, stride in and stand behind him. Then the other dwarf turns and calls out the name of his protector. More thundering footsteps, and a giant of his color strides in. Then the two dwarfs goad each of their giants to engage in a series of blows and counter blows. After numerous drastic exchanges, and a devious peace conference, the two giants ultimately abandon their two irreconcilable clients to fight it out by themselves. But the mean-spirited dwarfs have no stomach for personal battle, and so cling together in a terrified embrace, repeatedly moaning,"How will we get along without our protectors?" "I got the wildest designer in the country, Vratislav Hlavat_, to give the film the highly bizarre look the story demanded. Hlavat was not only a wild designer, but also a wild adventurer. He and few other hot-eyed pals were flying on natural gas in homemade balloons! I brought in my most promising assistant, Milan Klikar, to do the layouts. Then, just as we were ready to begin animation, the Russians came in! After a week of terror, I put Zdenka and the Giants layouts in my little Saab car, and drove over the border to Austria. I couldn't take a chance of being expelled from the country, and having Zdenka, still a Czechoslovak citizen, locked in."